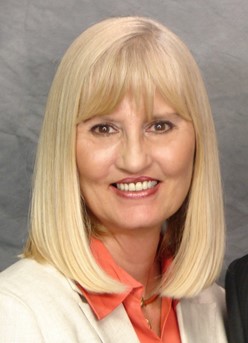 In 2007, McGuckin-Woolam partnered with broadcaster Speed Marriott to create the online training company, P1 Learning which currently caters to thousands of broadcast stations and media-based companies across the Country.

“From day one Katey has always been our sounding board for new ideas,” said P1 Learning Co-Founder Speed Marriott. “She brought with her a sense of wonderment and awe in the creation of the P1 Learning product. The past 13 years have been a wonderful ride, the company that we have become would not have been nearly the same without her. She’s going to be more than missed.”

Prior to P1 Learning, Katey McGuckin-Woolam brought 30+ years of broadcast experience as one of Kansas City’s most recognizable voices. She was on the number one morning show in Kansas City, KY102 with Dick and Jay. After learning from the best, she was given her own show that generated number one ratings at night and a write up in Billboard Magazine. She later reunited with Dick Wilson for 19 years of morning duty on 94.9 FM, helping the wake-up show stay in the top five 25-54.

At P1 Learning, McGuckin-Woolam’s talent and business sense offered P1 Learning’s customers several advantages as she knew what stations needed to do to succeed between various departments with her inner workings of programming, promotions and sales which kept advertisers coming back year after year.

“The footprint that Katey leaves behind will forever shape our company,” said P1 Learning’s President and General Manager Bryan Marriott. “Katey brought passion, joy and devotion to the company and while I’m sad to see her go professionally, I am personally ecstatic for her retirement. She’s absolutely earned it.”

“I want to thank everyone for making the last 13 years so special,” said McGuckin-Woolam. “Speed was not just a partner but a dear friend and chief motivator. I take with me some of the happiest memories I had in my 30 plus years in the industry. To all P1 Learning customers, thank you. I learned as much from you as I hope you learned from our training.”

McGuckin-Woolam’s official last day will be December 31st, 2020. P1 Learning’s Cole Grieves, Client Success Manager, and Jennifer Lane, Programs/Marketing Director, will step in to provide the personalized service that customers have come accustomed to with McGuckin-Woolam.